On behalf of the Board of Management (BOM) and members of staff of the National Broadcasting Commission (NBC), I want to welcome you to this gathering. Let me thank you all for coming from far and near, for the occasion. This gathering brings the broadcast operators and the regulator together, and it this two-way relationship, which helps to give life to Nigeria’s broadcasting industry. The last time we met like this, was on Wednesday, 22nd of February, 2017; six months ago. We have had an action-packed year in every sense at the NBC and in our industry, so I feel happy that you are all able to attend this gathering today.

When we met inside the LadiKwali Hall of the Sheraton Hotel, six months ago, I had pointed out that we all faced a very difficult problem as a result of “the illegal and rampant use of transmission power by stations all over Nigeria”. I added in that speech, that “stations procure transmitters without respecting the stipulated and recommended transmitter power in city-based FM stations. The consequence of this is that we have frequency clashes occurring all over Nigeria”. And as of the morning of February 22nd, 2017, the NBC had compiled a total of 69 stations around the country, where transmitters had been installed BEYOND the transmitter power stipulated in the conditions of their licenses. This morning, I have a list of 89 such stations, and the list is not exhaustive! 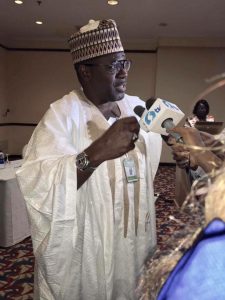 In the period since our last meeting, I have heard from many licensees about their transmitters. Many of them reminded me that the licenses they were given, allowed them to purchase the transmitters that they installed. That is why they have high-power transmitters installed all over the country today, which have become responsible for the frequency jamming that is taking place all over Nigeria. We are dealing with an anarchic situation in the Nigerian broadcasting airwaves, to be honest, and there is no responsible regulatory institution that can allow the problem to persist. We must find a way through the problem and we would!

There are a couple of points here. The first point is to remind all of us, that the electromagnetic spectrum is a finite resource, that all nations of the world deploy for various uses, from broadcasting through to space science and telecommunications. This is the reason that every sovereign country carefully works out spectrum allocations to be able to apportion for the various functions. Nations understand the importance of this finite resource and take the steps to ensure the judicious use of the Radio Spectrum to derive maximum benefit for their development purposes; Nigeria does that too. The International Telecommunication Union (ITU), a specialized institution of the United Nations system, allocated the 88MHz-108MHz frequency band for FM radio services. And all our stations are consequently operating within these bands.

Soon after the Nigerian government de-regulated broadcasting in 1992, NBC began licensing commercial FM stations. And at the beginning there were few stations; so the regulatory institution allowed the earlier broadcasting outfits to deploy transmitters which covered wide areas.  But then Nigerians saw the advantages inherent in ownership of broadcasting stations and there was a spike in requests for licenses. Before long, certain commercially-viable locations like Lagos, Port Harcourt and Abuja became entirely saturated with FM stations, and it became impossible to license new stations in these locations. The same problem started appearing in other parts of the country. This was the reason why the NBC was forced to suspend the sale and processing of broadcast application forms for FM radio services in 2008, in those locations.

The fact has not stopped requests for frequencies in these areas. And in an attempt to find a resolution to the impasse, I was informed that all industry stakeholders resolved, at the 2010 Nigeria Broadcasting Code review exercise in Uyo, Akwa Ibom State, to LIMIT the coverage area for FM radio services in Nigeria to become city-based licensing regimes. The consequence of that was that at the expiration of the 5-year licensing cycle, EVERY FM radio license in Nigeria was expected to become a city-based license, that would have a MAXIMUM of 2kw transmitter power! That regime of licensing and transmission power was supposed to have become the norm in Nigeria in the past TWO years. But that is NOT the case. As I have stated, we have compile a list of 89 stations having installed transmitters with power outputs FAR IN EXCESS of what was approved. These range from the illegal installations beyond the 20WATTS allotted to tertiary institutions, many of who went on to install transmitters of up to 1KW and a lot of which transmit as commercial FM stations; contrary to their licensing instructions that said they were to be for strictly educational and campus-based events. I travel in cities around the country, and I hear Campus radio stations broadcasting just like any typical FM station. I want to assure ALL these campus FM stations that they would SOON be cut to size! They have to be what they were licensed to be, as educational broadcast outfits to help train students offering mass communication courses and to broadcast campus events. We will NOT allow them to be commercial FM stations. And ALL the transmitters beyond 20WATTS in the Nigerian tertiary institutions would eventually be de-commissioned! Similarly, there are commercial FM broadcast outfits that installed 2.5Kw; 3Kw; 4Kw; 5Kw; 6Kw; 10Kw; but the most extreme would be a licensee with a 30Kw and 35Kw transmitter! I am not too sure that even Voice of Nigeria, that is our external broadcaster has such a transmitter!

So many reasons can be adduced for this problem. The first was what I mentioned earlier. The original licensing regimes allowed many earlier FM stations to install transmitters that went beyond the limits of the cities where they are located. But the simple response to that is that the licensing cycle is for a duration of FIVE years; thereafter, at the point of renewal, the NBC reserves the right to change the terms of the new licensing regime. But it was an industry consensus which led to the decision to limit FM licenses as city-based 2Kw licenses, from 2010. Two years down the line, FM stations have not complied with the new regime. And because finite frequencies are allocated and then re-allocated on the basis of the new regime of licensing, we have the problem of these frequency jams all over Nigeria!

Related to all these, is the fact that when new stations are being inspected by NBC engineers, as part of the mandatory requirements to be permitted to commence transmission, we often discover that licensees have installed transmitters beyond what was stipulated in the conditions of licensing. The NBC Engineering Department usually requests that such stations sign undertakings not to transmit beyond 2Kw. They do so gladly, just to be allowed to go on air. The moment the backs of the NBC operatives are turned, they rev into full power! A licensee that intentionally procured a transmitter beyond the terms of the license was not about to obey the law in the first place. This problem festered because the NBC also abandoned what it did in the past: pre-inspect transmitters at the ports before they are allowed to be collected, installed and commissioned by the licensees! The final part of this problem is related to the previous one, and that is the unfortunate penchant we see all around us, of individuals bending the rules; believing that they can exploit their friendships with the leading political authorities in Nigeria, to sidestep the regulatory powers of the NBC. Consequently, illegalities fester and we endanger broadcasting; allow the reign of anarchy and contribute to the negative perceptions of our dear country, Nigeria!

Today’s gathering has been called for us to find solution. We MUST solve the impasse that we face with transmitter power in Nigerian broadcasting. I sincerely believe that we must end the regime of impunity, disorder and illegality, which allowed licensees to install transmitters beyond the allotted power for city-based FM stations. When we met on February 22nd, 2017, we put ALL licensees on notice, that they have SIX MONTHS to commission new transmitters to meet the regime of city-based FM licensing. Six months down the line, there is no movement. Today’s stakeholders’ gathering is to find a way out of the logjam. The NBC is committed to a law-governed regime of broadcasting licensing and at the heart of that is for all licensees to install ONLY the transmitters stipulated in their licenses. One of the ways we have been trying to enforce that, is that I have refused to give approval to any station about to, or that is carrying out test transmission, which has installed a transmitter beyond 2Kw. The trick of signing an undertaking to be of good behavior is not sufficient. A licensee obeys the law from the beginning or there would not be broadcasting! It is that simple!

We have held discussions with the leadership of the Broadcasting Organizations of Nigeria (BON) on this issue. They are very critical to finding solution for this issue and I am happy that they are also here today. Finally, I want to remind us all that we are very privileged members of the Nigerian community, because we husband on behalf of the over 190million people of our country, the finite resource of radio frequencies. Our obligation is to husband this finite resource in a very patriotic, responsible and lawful manner. On our part, I want to assure that the NBC would firmly and fairly regulate broadcasting, to ensure that the regime of impunity is eliminated from the system. There is a very strong national security imperative involved with the issue of transmitter power too, especially with the manner that broadcasting is also being pressed into service to serve unpatriotic, anti-national and secessionist agendas, or in attempts to de-legitimize our country. We will work with the Nigerian national security system to ensure that transmitter power used in broadcasting meet the strict conditions of legality. One of the ways we would do that is to re-instate the pre-inspection of transmitters in the ports as was the practice in the past. To effect that, we would work closely with all the relevant authorities in the Nigerian ports. Please let us freely examine the points I have raised this morning to enhance our industry and help sanitize the airwaves. We cannot allow an anarchic regime of frequency jamming in Nigerian broadcasting.

Thank you very much for your attention!