OSSAP-SDGs Partners National Agency for the Control of AIDS (NACA) to Combat HIV-AIDS Prevalence in Nigeria.

The office of the Senior Special Assistant to the President on Sustainable Development Goals (SDGs) is partnering the National Agency for the Control of AIDS (NACA), to check HIV-AIDS prevalence in the country.

The Senior Special Assistant to the President on Sustainable Development Goals Princess Adejoke Orelope-Adefulire disclosed this recently in Abuja when she received NACA Director General, Dr. Sani Aliyu in her office.

Princess Adefulire noted that HIV-AIDS is a major cause of loss of lives amongst women, youth and children in our society, adding that something concrete has to be done to ensure that no Nigerian lose his or her life through HIV-AIDS.

She advocated for the establishment of more HIV-AIDS test/screening centers across the country, and urged all would be couples and pregnant women to know their HIV-AIDS status so that mother-to-child transmission can be adequately checked. 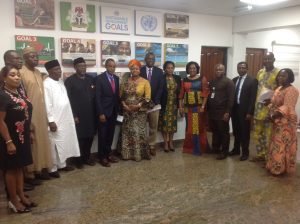 Caption: Senior Special Assistant to the President on Sustainable Development Goals (SSAP-SDGs), Princess Adejoke Orelope-Adefulire (in the middle), DG National Agency for the Control of AIDS (NACA) Dr. Sani Aliyu (to her right) and other management staff of the two agencies during a courtesy call to SDGs office recently in Abuja.

The SSAP charged the youth to be more responsible and avoid promiscuity, as according to her, “doing so will go a long way in curbing the HIV-AIDS menace.

She implored NACA to, in the spirit of SDGs goal 3 (good health), revive and sustain the campaign against HIV-AIDS for increased awareness amongst the citizenry.

She sets up a Committee and charged it to, within two weeks, come up with a workable and sustainable partnership and intervention framework capable of producing the desired results.

In his submission, the DG NACA, Dr. Sani Aliyu said the visit is a follow up to the previous one, and the purpose remains ” to solicit for partnership and mobilize resources to check HIV-AIDS prevalence in the country”.

He said that, out of the three million Nigerians infected with HIV virus, half of them are women and children living in rural areas; asserting that 80 million Nigerians from available statistics do not know their HIV status.

He stressed that, the emerging disturbing discovery is the fact that a lot of the new cases involved youth of 15-24 years especially prevalent among the internally displaced persons.

He pointed out that, inadequate resources is hampering the Agency’s efforts  to put proactive prevention measures in place, adding that 80% of the resources available goes to treatment of patients, living little or nothing to prevention campaigns and activities that would create the needed demands to activate existing centers.

He advocated for a policy that will make it mandatory for pregnant women to undergo HIV-AIDS test as a way to check prevalence of mother-to-child transmission in the country.