Chairman, Governing Board of Niger Delta Development Commission (NDDC), Distinguished Senator Victor Ndoma-Egba (SAN) has expressed interest and willingness of the Commission to develop a workable framework for partnership with the Niger Delta Support Programme (NDSP) which is an European Union (EU) funded programme active in Five (5) states of the Niger Delta Region.

Ndoma-Egba also noted that EU Ambassador to Nigeria, H.E. Michel Arrion, was the first to visit him when he assumed office as the NDDC Board Chairman, assuring that the NDDC is committed to partnering with NDSP in providing basic necessities like water and sanitation for the good people of Niger Delta Region.

He said this when the team from NDSP visited him at his Abuja office to explore areas of synergy between their organization and the NDDC.

Ndoma-Egba said: “NDDC is excited about the prospect of working with NDSP to deepen the water policy and formulate the legal framework for water and sanitation. 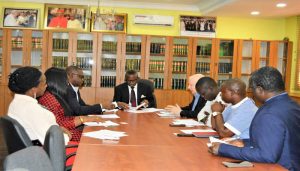 Speaking earlier, leader of the team, Mr. Albert Achten, explained that the NDSP is the first phase of the EU assisted water component of the NDSP-3 with presence in five states of the region namely; Bayelsa, Edo, Rivers, Delta and Akwa Ibom.

He further stated that recently the EU approved the extension of the NDSP-3 to 2019 to include the implementation of a synergy programme between the NDSP-3 and some Regional organizations in the Niger Delta like; Ministry of Niger Delta Affairs (MNDA) and Niger Delta Development Commission (NDDC) who are also Interventionist Agencies in the Region, addressing the water and infrastructural issues.

“The thrust of this synergy is aimed at ensuring that these Government Agencies can leverage on the achievements and experiences derived from the implementation of the first phase of NDSP-3 to replicate effective and sustainable water deliveries and infrastructure within the Niger Delta Region.

“the programme is targeted for the implementation of a joint collaborative plan and support for ensuring sustainability of water service delivery in the Region. It is envisaged that this synergy will result in increase in the community managed water schemes in the Region.” He said