Chairman/Chief Executive, National Drug Law Enforcement Agency, NDLEA, Col. Muhammad Mustapha Abdallah (Rtd.) has enjoined states where forests are ravaged by cannabis cultivation to adopt Alternative Development model to counter the menace. Abdallah made this call in Ibadan, Oyo State capital, when he along with Thailand Ambassador to Nigeria, Wattana Kunwongse visited the Oyo State Governor, Senator Abiola Ajimobi.
2. According to Abdallah, through the help of Alternative Development, cannabis farmers are supported with incentives that attract them to the cultivation of legitimate and economically beneficial crops.
3. The NDLEA Boss noted that Alternative Development is an approach being advocated by the United Nations Office on Drug and Crime, UNODC, aimed at mitigating the vulnerabilities that lead to involvement in illicit crop cultivation and ultimately eliminating such cultivation.
4 “We have hundreds of thousands of farmers affected by poverty, food insecurity, lack of land, instability who as a result, engage in illicit drug cultivation. By Alternative Development, State governments intervene through the provision of land, expertise, implements, seedlings, chemicals while buying up proceeds off farmers at an attractive rate”, the Chairman further stressed. 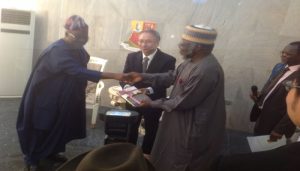 5. Both the NDLEA Chairman and Thailand ambassador to Nigeria were in Oyo State to discuss ways of mutual cooperation between Thai Government and Oyo State which is already setting the pace in Alternative Development. According to the Thai Ambassador, Thailand is the leading light in Alternative Development and that from his discussion with NDLEA Chairman he got to know that Oyo State stands out in alternative use of land hitherto used for Cannabis cultivation.
6. “I have decided to come to Oyo State and have fruitful discussion with the governor in order to develop the agricultural potential in the state and to cooperate with the state to develop and fully launch the Alternative Development in the State just as we did in Afghanistan”, he maintained, assuring that “We need to transfer our expertise in seed plant and post harvesting management and marketing of agricultural produce.” According to him, “fifty per cent of our land is committed to agriculture and I am here to follow that direction. We will bring experts in agriculture to lay the foundation for our cooperation with the state on agriculture. “
7. Ajimobi who was full of praises for the NDLEA Chairman and the Ambassador for conceiving this relationship noted that Oyo State is blessed with arable land with the highest potential for agriculture and with hardly any need for irrigation. “My administration is built on five pillars, one of which is technology and agriculture is the driving force of our technology,” the governor asserted adding “we have forest reserves which people use for growing cannabis and other criminal activities. We resolved that instead of people growing cannabis, we have to turn a greater portion into farming. We have advertised the land and people are already buying same for farming.”
8. The governor proposed the setting up of a technical committee to come up with the template and time frame for the take off of the programme. “This will be a trail blazer for the commercial and industrial relationship that a state will have with Thailand”, he noted.