Standards Organisation of Nigeria has called on all organizations in Nigeria to join the quality vanguard by imbibing the spirit of voluntary regulation, in order to promote the improvement of lives of the citizens through standards.
This admonition was given in Kano by the Director General, Mr. Osita Aboloma at the destruction of one thousand and eighty (1080) cartons of expired cigarettes worth about N27million.
Mr. Aboloma stated that this can be achieved by always putting the interest of public health, safety and well-being, above profit considerations, as socially responsible citizens of the Nation.
He commended Messrs. Blackhorse Tobacco Limited for voluntarily declaring the expired cigarettes to the Standards Organisation of Nigeria for regulatory action and urged other organisations to emulate the patriotic act. 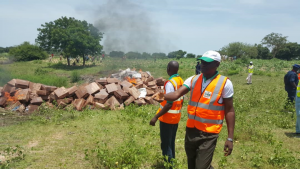 Represented by the Kano State Coordinator, Mr. Yunusa Mohammed, the SON Helmsman listed the brands of cigarette as Gold Esse Special and Cloud 9 Menthol which were imported from Korea and expired in January 2015 and June 2016 respectively.
Mr. Mohammed said the company attributed the expiration of the cigarette brands to low patronage due to customer preference, stressing that the delay in communicating to SON was a result of the parent manufacturer’s insistence on visiting Nigeria to take stock of the products before giving approval for the declaration to SON.
The destruction exercise was carried out with the assistance of officials of the Kano State Ministry of Environment, in the presence of representatives of Blackhorse Tobacco Limited, National Environmental Standards Regulatory Agency (NESREA), Consumer Protection Council (CPC), security personnel, SON officials and the media.