HCSF Advocates for Positive Mindset Towards the Nigerian Military

The Head of the Civil Service of the Federation (HCSF), Mrs. Winifred Oyo-Ita has called on Nigerians to have a positive mindset toward the Nigerian Army, stating that their sacrifice for the security of nation is quite commendable.

The Head of Civil Service gave the advice when she paid a courtesy visit to the Honourable Minister of Defence Gen. Mansur Muhammad Dan-Ali (Rtd.), in company with some Federal Permanent Secretaries during a Peer Review Mechanism visit to the Ministry on Thursday, 7th June, 2018.

Mrs. Oyo-Ita said that the Nigerian Military has fared well in its obligations. She said the sector is sacrificing to the nation with sweat and blood, and as such should be commended and appreciated. In her words,

“The Nigerian Army has done a good job in taking all the pains to secure the lives of Nigerians, and so deserve  commendations; but some people hardly appreciate their efforts rather look for reasons to finding fault with them”.

The Honourable Minister of Defence, Gen. Mansur Muhammad Dan-Ali (Rtd.) in his remarks stated that the Ministry through its Defence Sector Reform has helped in enhancing Civil Military Relations by building mutual understanding between the Civilian and Military components thereby enhancing cordial coexistence.

Gen. Mansur further said the present administration of President Muhammadu Buhari has been very supportive of the Nigerian Army in carrying out its statutory obligations. The Honourable Minister promised that the Military will continue to do its best to see that the country is well secured.

The Permanent Secretary, Ministry of Defence, Mrs. Nuratu Batagarawa in her presentation gave a breakdown of the rehabilitation’s work of Army Barracks across the six geopolitical zones, and some ongoing projects in the country.

Mrs. Batagarawa further said the Ministry has organized series of Training Programmes for Capacity Building of staff of Ministry of Defence. The programmes are aimed at enhancing their capacity for effective Service Delivery. According to her, a total of 1,354 Officers of various Grades/Cadres were trained in   2017.

Office of the Head of the Civil Service of the Federation. 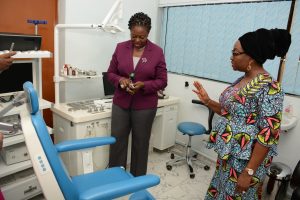 HCSF, Mrs. Winifred Oyo-Ita and the Director, Medical Services, MOD, at the Dental Lab. during the inspection tour of medical facilities after the Peer Review Meeting to the Ministry of Defence. 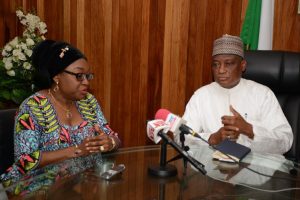 HCSF, Mrs. Winifred Oyo-Ita (L) and the Honourable Minister of Defence, Gen. Mansur Dan-Ali during the courtesy call by Permanent Secretaries on Peer Review Meeting in the Ministry of Defence. 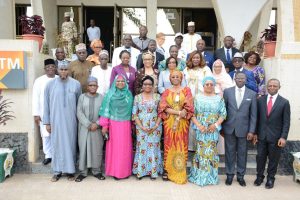 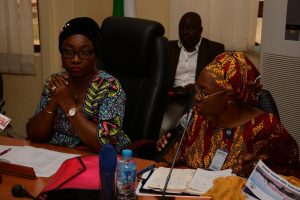