The Governor of Sokoto State Rt. Honourable Aminu Waziri Tambuwal has called on stakeholders in the sector to pay special attention to product quality and control to be able to compete favourably in both local and international markets.
He made this call while delivering a keynote address to delegates and Officials of the 9th National Council on Industry, Trade and Investment hosted by his State Sokoto.
The anchor of the Governor’s remarks hinges on call to
• Address the ongoing market deficiencies
• Ensure effective price management in the country
• Give priority attention to product quality control mechanism and standardization
• Extend the ease of doing business to small businesses by way of
I. Ease of access to financing
II. Ease of access to other support services
The Governor seized the opportunity to highlight the efforts of his Government to diversify the economy of his State as he admitted that Sokoto State is one “with lots of unexploited natural resources.” He pointed out the “Sokoto Investment House” which is meant to “initiate agreement, partner, engage and participate in all aspects of market activities as a conglomerate Company.” “It is to seek support, give incentive and guide businesses”, the Governor declared. 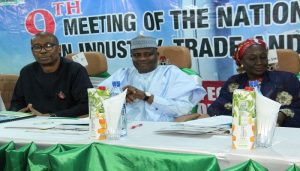 Of the Strategic Plan pf the State which Governor Tambuwal says is line with Federal Government’s Economic Policy thrusts, he revealed that Sokoto State has the Organic Fertilizer Production Plant (partnering IML Company) with capacity of 30 Metric Tons of daily production has gone into production since June, 2017. He says the raw material to feed the Company is readily available in Sokoto and product price is affordable to buyers.
The Sokoto Textile Factory, in partnership with Hijrah Textile Company, sited at Kalambaina Area was also showcased by Tambuwal. He however admitted that the stage of completion is 70% with the equipment currently being test-run.
The Sugar Processing Factory of the State sited at Goronyo which is a 500 TCP Plant with daily production capacity of 45 metric tons per day, the Governor seeks partnership of the National Sugar development Council for, as well as the support of the Bank of Industry.
To energize the industrial development efforts of Sokoto State, Aminu Tambuwal revealed further to his august visitors that the Independent Power Project of the State has reached 80% completion with a capacity of 35 MW and this, he said will be commissioned soon. 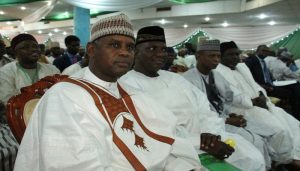 Tambuwal sold to the gathering that Tax break/waiver; support to access financing; ease processes; entry permit assistance to foreign investors; transfer/repatriation of quotas and guaranteed security in the State are what awaits serious prospective investors to Sokoto.