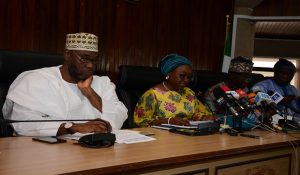 The Head of the Civil Service of the Federation, Mrs. Winifred Oyo-Ita made the disclosure on Friday, 13th July, 2018 in Abuja at the Press Conference to kick start the IPPIS verification exercise. 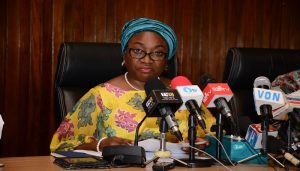 She explained that the Integrated Personnel and Payroll Information System (IPPIS) is one of the initiatives of  Government which commenced in 2006 with a view to training transparency, accuracy and reliability in the management of personnel records in the Service while also curtailing avoidable excesses in personnel costs.

Reiterating the imperative of the exercise, the Head of Service said: “In fulfillment of one of the cardinal principles of the introduction of the IPPIS programme which is blocking loopholes and discouraging corruption in the administration of personnel records, it is important that the Human Resource Information on the IPPIS Portal be cleaned up with a view to having credible data for both payroll and personnel administration and analysis”.

Mrs. Oyo-Ita further said that the upcoming verification exercise is to authenticate the documents of the individual employees of the Federal Government and the procedure is that every employee will present themselves for screening and their document scanned into the system.

She stated that as at the end of June, 2018 the total number of 486 MDAs have been enrolled on IPPIS with over 330,820 employees being paid salaries through the IPPIS platform.

The Head of Service advised all concerned MDAs to cooperate with the verifiers by providing enabling environment for the successful conduct of the exercise according to the circulated time table.

She warned that failure of any eligible employee to partake in the verification exercise would have great consequence.  She said: “The consequence of non-compliance is having your data deleted from the Federal Government Employee Database.”