The Head of the Civil Service of the Federation, Mrs. Winifred Oyo-Ita signed a Memorandum of Understanding with the Alpha Mead Group as part of the Public-Private Partnership (PPP) Policy Initiative of the Government for the Ground Floor, Block A and Parking Lots of the Federal Secretariat Phase II Complex in Abuja, on Monday, 23rd July, 2018. 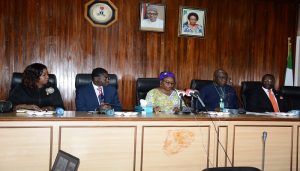 The memorandum is for the facelift of facilities at the Federal Secretariat to create a conducive environment for Federal Civil Servants for efficient service delivery.

Mrs. Oyo-Ita in her remarks said the move is premised on the need to maintain government buildings,

“Over the years, it had been observed that facilities in most of          these buildings have deteriorated due to lack of maintenance          while others had become obsolete. The state of the buildings          was no longer conducive to workers and visitors and do not          project the government in a positive light”

She further stated that at the completion of the facelift of the facilities, it will serve as a model for all Federal Secretariats nationwide and restore the image and dignity of government buildings.

The Managing Director of Alpha Mead Group, Engr. Femi Akintunde indicated the group’s readiness to upgrade the standard of the facilities in the Secretariat to the standard obtainable in corporate organisations according to best global practices. 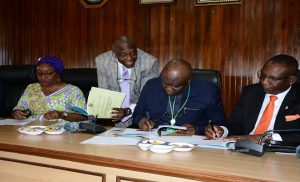 In addition, he said the facelift would create a serene and conducive environment that would enhance the productivity of workers and also earn revenue for the government.

In his welcome address, The Permanent Secretary, Special Duties Office in the Office of the Head of the Civil Service of the Federation, Mr. Leon Aliboh commended the effort of the Head of the Civil Service for her vision to revamp the hitherto abandoned Federal Government Assets nationwide and making them useful and conducive for Nigerian workers through PPP and not relying on allocation from government which cannot be enough to take care of the upkeep of these facilities.

Mr. Leon further said that the modified designs of the areas to be affected have been subjected to serious scrutiny by professionals from the Federal Capital Territory Development Control Department.

He also hinted that the draft MoU was drawn up by a combined Team of Legal Officers from the Office of the Head of the Civil Service of the Federation, Infrastructure Concession Regulatory Commission (ICRC) and Alpha Mead Group.