The Permanent Secretary Service Welfare Office in the Office of the Head of the Civil Service of the Federation, Mrs. Didi Walson-Jack, has reiterated the commitment of the Federal Government to improve the welfare and Benefit packages of workers. This is to ensure effective service delivery for desired developmental goals.

She made this disclosure on Tuesday 24th July, 2018 at the maiden edition of Permanent Secretary Quarterly Forum with Joint Union leaders in Ministries, Departments and Agencies (MDAs).
Mrs. Walson-Jack, said that the forum was established to provide opportunity for direct interface with union leaders in Federal Government MDAs, on issues relating to welfare and well-being of Civil Servants, as well as on other related Policies and Programmes of Government. 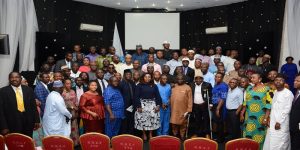 She said the theme of the forum’ ‘sustaining Industrial Harmony in the Public Sector: An imperative for achieving Federal Government’s Change Agenda for National Development’’ was timely and in line with the 2017-2020 Federal Civil Service Strategy and Implementation Plan approved by the Federal Executive Council.
She also said, welfare issues are at the heart of almost all industrial disputes hence the launch of a salary review for the Federal Civil Service as a first step to enhance the value proportion of Civil Servants under the FCSSIP.
She added that Government is collaborating with relevant stakeholders to address all issues that may cause conflict between employer and employee before they escalate into conflicts.
Mrs. Walson-Jack, further said that efforts to prevent re-occurrence of industrial disputes and Conflicts in MDAs and sustain industrial peace and harmony in Public Service birthed the Quarterly Forum, while the need to bridge the existing gaps in communication necessitated the need to cascade interaction with Executives of labour unions.
A presentation on ‘’Federal Government Group Life Assurance Policy for Public Servants’’ by Mr. Akin Abaoba of Capital Express Insurance Company was also featured in the forum. The presentation was to sensitize participants on the objectives of the scheme and how to benefit from it.