The Federal Government has initiated an exit management programme, tailored around the training of prospective retirees on various agriculture businesses in order to provide another stream of income for them as they transition to life of retirement.
The Permanent Secretary, Service Welfare Office in the Office of the Head of the Civil Service of the Federation, Mrs. Didi Walson-Jack, Mni, disclosed this today, Wednesday, 30th May, 2018, at the 3rd Permanent Secretary’s Quarterly Breakfast Meeting with Labour in Abuja.
Mrs. Walson-Jack said the purpose of the meeting is to provide a veritable platform for consultation with unions on the conditions of service and welfare of workers in the public service. It will also serves as a platform for the Service Welfare Office to receive necessary feedback on a number of initiatives targeted at enhancing the welfare and well-being of workers.
Reiterating Government’s commitment to the welfare of the workers, she said that the Exit Management Programme which is currently being piloted, was introduced as part of the initiative of the Office of the Head of the Civil Service of the Federation towards improving the welfare and well-being of Government employees as outlined in the Federal Civil Service Strategy and Implementation Pan, 2017 – 2020.
She added that retirement is a crucial stage in the career of Government employees and employees need adequate support to ensure easy transition, as done in several countries across the world.
The Permanent Secretary opined that interaction with labour unions/union executives in MDAs is necessary to bridge the gaps in communication and ensure a sustained industrial harmony.
She informed the union leaders that all issues considered and referred by the Joint National Public Service Negotiating Council Meeting to the 40th National Council on Establishments (NCE) meeting held in Owerri, Imo State, were discussed. The Council approved Four (4) out of the Fifteen (15) memoranda submitted by the Unions. While others were referred to the Council’s Standing Committee on Schemes of Service for further consideration.
On the issue of Review of DTA and First 28 Days Allowance in lieu of Hotel Accommodation, Mrs. Walson-Jack, said they are being looked into by her office.
She reiterated the need for both Government and Trade Unions to continue to collaborate and embrace the principle of collective bargaining and mutual respect to achieve a common purpose of enhancing the welfare of workers and delivering services to the people. She added that Government would continue to do everything possible to improve the welfare and conditions of service of workers as well as strengthening their human capacity to enhance their service delivery.
She also urged Civil Servants to be well informed of Government policies and programmes in order to avoid exaggerated expectations.
Speaking in the same vein, the representative of the Director General of the Nigeria Television Authority, Mr. Steve Egbo, said interaction between labour and Executive helps to engender synergy between labour and the Government; noting that besides food, the next most important need of man is shelter, which government should be committed to provide.
The Permanent Secretary’s Quarterly Breakfast Meeting is geared towards sustaining industrial harmony in the public sector with a view to achieving Federal Government’s Change Agenda for National Development.

Ogunmosunle,O.A.
Director Press& Media Relations,
Office of the Head of the Civil Service of the Federation. 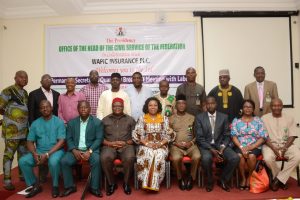 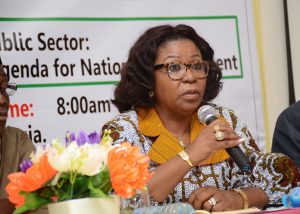