The Office of the Head of the Civil Service of the Federation in collaboration with some line Ministries,(Federal Capital Territory Administration, Federal Ministry of Finance, Ministry of Power, Works and Housing and the Ministry of Water Resources) have embarked on the development of infrastructure of the estates, under the Federal Integrated Staff Housing(FISH) Programme.

Mr. Emmanuel added that the handing over of the borehole to the Estate developer is also a further demonstration of Government’s commitment to the FISH Programme. It will also encourage developers to partner with government in the delivery of quality and affordable houses.

He stressed the need for Government to encourage the developers through the provision of necessary infrastructure that will reduce the cost of construction of the houses.

The Deputy Director, Nation Wide Rural Water Supply in the Federal Ministry of Water Resources, Mr. Ademoroti Isaiah, revealed that, rural populace constitutes 60% of the Nigeria Population, while the other 40% is semi-urban and urban populace. He said the water needs of the rural populace is the sole duty of the Ministry of Water Resources. They also render support to the State Governments which caters for the urban and semi-urban areas.

In his words ‘’we do intervention because rural development is vested in the hands of the local government to alleviate the suffering of the people’’ he added.

He further said, the solar powered water supply was considered because it is cost effective in terms of running cost and maintenance since it relies solely on sunlight. Mr. Isaiah said the donation in Karshi is the third water intervention rendered to FISH. The others are in Apo and Bwari.

In his reaction, the Chairman of Due Dons limited, Chief Donald Okoli, who is the Estate Contractor, assured that the Housing project will be completed and handed over within the next one year. He disclosed that a lot of infrastructural development like schools, hospitals and recreation areas, Shopping malls and solar power supply will be available in the estate.

Representative of the Managing Director Monolith Global Resources Limited, the contractor of the borehole, Mr. Patrick Ododo, who is the Head Business Operations North Central said they worked in partnership with the OHCSF and FISH after carrying out geological survey on the site. The project was completed in 4weeks and the maximum life span of the solar panel is 25 years.

The Estate is seating on 3.5 hectares of land and expected to house 270 housings (3bedroom Bungalows and 2Bederoom Detached Bungalows).

Office of the Head of the Civil Service of the Federation.

The Representative of the Head of the Civil Service of the Federation, Mr. Otu Emmanuel(m), the Chief Hydrologist, FMWR(L) and the Estate Contractor Chief Donald Okoli(R) after the handing over of the borehole in Karshi, Abuja.

The Representative of the Head of the Civil Service of the Federation, Mr. Otu Emmanuel(6th R), Iin a group photograph with the Chief Hydrologist, FMWR(4th L), the Estate Contractor Chief Donald Okoli(6th R),Deputy Director, Nation Wid Rural Water Supply, Mr. Ademoroti Isaih(5th R) and other stakeholders after the handing over of the borehole in Karshi, Abuja. 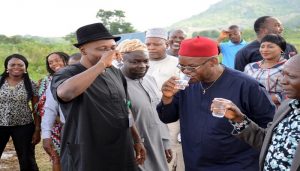 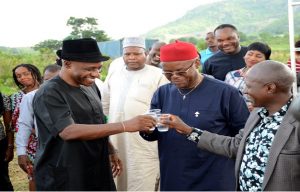