FCT to Pull Down Illegal Buildings in Lugbe,Kubwa ,Others

The Federal Capiatl Territory Administration (FCTA ) planned to carry out massive demolition of illegal structures in Lugbe, Kubwa ,Kuje,Monjey viilage and other satellite towns and settlements in the Territory.

The Director,Development Control,Abuja Metropolitan Management Council (AMMC) disclosed that the affected structures had been marked and their occupants notified about the the impending demolition exercise which he said would also affect various squatter settlements. 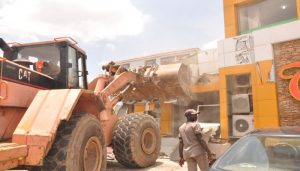 Accordingly, the Fisherman Village behind NAF Conference Centre, Jabi as well as unapproved structures on Oladipo Diya Road to be demolished by next month,December 2017.

So far, face to face sensitization has been on the affected communities, a time table has been drawn before operation begins.

The Development Control Deparment guarantee issuance of building plan approvals within the period of three months. This goes a long way to stimulate investments and boost development in the FCT