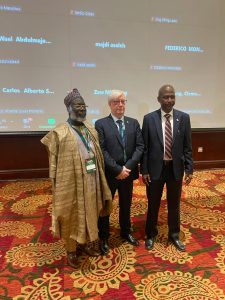 Past President of the Nigerian Society of Engineers (NSE), Engr. Mustafa Balarabe Shehu, FNSE, FAEng. has been returned elected as the President-elect of the World Federation of Engineering Organisations (WFEO) in an election conducted at the General Assembly of the ongoing World Engineering Summit of the global Engineering body in San Jose, Costa Rica.

Engr. Shehu polled 67 out of a total of 71 votes to clinch the coveted position at the election. It is instructive to note that Engr. Shehu is the first black African to win election into the exalted office of the the highest ranking officer in the conglomerate of Engineering organisations across the world.

It would be recalled that Engr. Mustafa Shehu has been the Executive Vice President of WFEO after winning the election at the World Engineering Summit in Australia in 2019. He will take over as the substantive WFEO President at Prague, Czech Republic in October 2023, during the Organisation’s General Assembly