Mr. Mamman Ahmadu, DG, Bureau of Public Procurement while receiving the Chief of Army Staff, Lt. Gen. Tukur Yusuf Buratai in his office on a courtesy visit today stated that there has been a significant increase in compliance in line with the provisions of the Public Procurement Act under the watch of the COAS. Which was not so prior to his time. Emphasizing that the determination to comply with the provisions of the Act is exhibited by the Army’s regular interface with the Bureau for guidance and directions in their drive towards ensuring that “due process” is followed to the letter.

Mamman Ahmadu while appreciating and congratulating the Chief of Army Staff over his gallant exploits alongside his team in degrading the insurgency and terrorism in the North East and other parts of Nigeria reflected that the Nigeria Army is in the forefront in the pursuit of due process in the military. And that “valued engineering” which is in use in most procurement procedure emerged from the military procurement process.

The DG also stated that with the level of compliance in the military is traceable to their disciplined training that has made them sticklers to rules and regulations, coupled with standard operating procedures. He assured the COAS that BPP will support the Army in their efforts to follow due process.

COAS also said that the Army will seek more collaboration and synergy with the Bureau of Public Procurement in their future dealings in due process. Stating that the military is an institution that complies with due process. The COAS further expressed his appreciation to the DG and members of his team for sending a resource person to the Army to enlighten and educate the officers on due process in a seminar recently held.

Lt. Gen. T.Y. Buratai in his final note stated that while seeking for continuous partnership with BPP, he will ensure that public procurement will not only be at the Army’s Headquarters but will go down to all the formations of the army to expose all officers to the importance of the public procurement process. 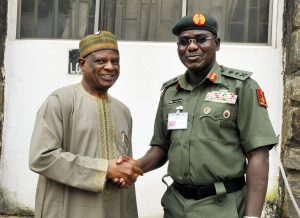