The Executive Governor of Bayelsa State, His Excellency, Hon. Henry Seriake Dickson has advocated for consultative and inclusive approach between Government and Labour. According to him no Government can point to any achievement without the sacrifice and work of the bureaucracy. 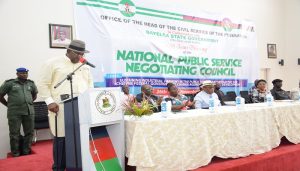 Governor Dickson revealed that it is for that reason that Bayelsa State invests heavily in human capital development because they are invaluable for advancement of any nation.

The Governor made this pronouncement when he declared open the 2018 meeting of the Joint National Public Service Negotiating Council in Yenagoa, Bayelsa State on Tuesday, 27th November, 2018.

He said the meeting is important because once Government at the Centre gets things right it will trickle down to the States and have positive effects.

The Governor also did the formal presentation of Constitutions of the Councils (I, II, III &Joint). While doing the presentation he applauded the salutary effort of the Head of the Civil Service of the Federation, Mrs. Winifred Oyo-Ita and her team who ensured the production of the legal documents for the Councils. He said the presentation is laudable because it is the first in ten years that such an operational is been produced.

The Chairman of Council and Permanent Secretary, Service Welfare Office, Office of the Head of Civil Service of the Federation, Mrs. Didi Walson-Jack mni, in her address restated the great importance Government places on the continual improvement of work conditions and welfare of Public Servants.

Mrs. Walson-Jack said this commitment to workers welfare and well-being is underscored by its inclusion as one of the eight (8) priority areas in the Federal Civil Service Strategy and Implementation Plan 2017-2020.

The Chairman of Council intimated about on-going concerted efforts to institutionalize key welfare initiatives for employees across the Federal Service in order for them to be sustained. She revealed that the proposed welfare policy which will document all the welfare and benefit packages for all Civil Servants is among the initiatives to be institutionalized.

Mrs. Walson-Jack expressed Federal Government belief that the successful implementation of these initiatives would transform and reposition the Federal Civil Service to a ‘modern Public Service Organisation that provides world-class service for sustainable National Development’.

The Chairman of Council therefore ensued for support and cooperation of everyone for sustained industrial peace and harmony in service. She implored the Trade Unions to always have continuous collaboration with Government and embrace the principles of collective bargaining and mutual respect.

She further encouraged the Trade Unions to always embrace the tenets of Integrity, Merit, Performance and Transparency in the conduct of Government business in consonance with the ethics of the Public Service and for overall national interest.

The theme for all Industrial relations activities in 2018 as approved by the Head of Civil Service of the Federation is ’Sustaining Industrial harmony in the Public Sector: An Imperative for achieving Federal Government Change Agenda for National Development.