Celebration of a Life of Struggle, Sacrifice and Service to Humanity- Adieu, Comrade Winnie Madikizela Mandela

The world woke up on Monday, April 2, 2018 to the news of the passing of one of Africa’s greatest freedom icons and heroine of democratic emancipation – Comrade Winnie Madikizela Mandela. The demise of Winnie Madikizela Mandela brings to a sad but glorious end to another chapter of the anti-apartheid struggle. The outpour of grief that has gripped millions of people in South Africa and other parts of the world eloquently testifies of the worthy contributions of the one that many South Africans love to call “Mama”.

The Nigeria Labour Congress joins millions of lovers of freedom and democracy to mourn the passage of this priceless embodiment of resilience and tenacity; typical of the African woman. Though saddened by Winnie’s demise, the Nigerian Labour movement has many reasons to celebrate the life of struggle, sacrifice and service to humanity which Mama Winnie epitomized.

It is difficult to put into words the scorching sacrifice of Winnie Madikizela Mandela to the struggle to decapitate one of the most brutal systems of racial segregation ever known to man. It is hard to tell if Winnie Madikizela Mandela understood the future that was before her when she accepted the advances by a certain young lawyer at a certain bus stop in Johannesburg. Winnie Madikizela Mandela was only twenty seven years when the vicious hands of apartheid abducted Nelson Mandela from their love nest into a twenty seven year prison ordeal. During Nelson Mandela’s incarceration, Winnie was summoned to grow up quickly into a new role as the “mother of the struggle”.

In growing up to accept the responsibilities thrust in her path, Winnie made her mark as a genuine lover of people, freedom fighter and champion for social justice. In the years that Nelson Mandela and other key leaders of the African National Congress were either in prison or in exile, Winnie Madikizela Mandela led from the front as she and other young comrades dared the apartheid fangs of the National Party. She was harassed, beaten, imprisoned and robbed of the normal life of a working professional and a mother. Yet, she stood tall and unbent for the joy of the liberation of millions of South Africans. 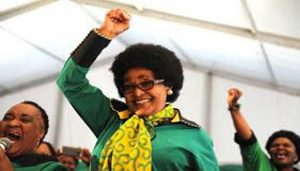 One of the iconic images that evokes deep reflections on the life, struggles, sacrifice and service of Mama Nomzamo (the one who tries) was when on 11th February, 1990, she marched out of Cape Town’s Victor Verster Prison, hand-in-hand with Nelson Mandela, in a clenched fist salute to her compatriots. That image speaks volumes of the real Winnie that the enemies of freedom wanted to conceal forever. Winnie was bold, audacious, unpretentious and unrepentant about her convictions on black emancipation. Like a true mother hen, she was ready to sacrifice anything to keep her chicks from menacing predators. Even her worst critics admired the originality of her convictions.

The Nigeria Labour Congress did not just admire Winnie’s convictions, the labour movement in Nigeria contributed to the anti-apartheid struggle. In 1976, Nigeria set up the Southern Africa Relief Fund (SAFR) in order to bring relief materials to the victims of Apartheid. Nigerian workers contributed 2% of their salaries to the fund which was also known as the “Mandela Tax”. Nigerian workers deployed in the trade, excise and transport sectors were instrumental in enforcing economic sanctions against apartheid South Africa.

The greatest trial of our convictions, most times, does not show up in the seasons of adversity but in the serenity of prosperity. Winnie was more sorely tempted in the comfort of post-apartheid Cinderella to abandon her convictions on the socio-economic emancipation of her compatriots who were left behind. She kept speaking up for the poor and mistreated workers of South Africa up until her death. There are some lessons to go round for comrades and activists who drop their convictions and take up the megaphone of oppression once they are invited to “eat at the table of the oppressors”.

Winnie Madikizela Mandela has played her part. She has run her race. She has finished her course. Now, she has obtained an imperishable crown of affectionate remembrance in the hearts of all lovers of freedom, democracy and dignity. Winnie bows out in aplomb but not without leaving a final defiant note to all oppressors everywhere – “you too will soon pass away – not into a blaze of glorious remembrance – but into the grave of disdain and contempt”.

Adieu Comrade Madikizela Mandela! You were more than a paragon of beauty! You are a rare diamond!! You understood your mission and you fulfilled it!!!