The recent call by petroleum downstream operators on the Federal Government to increase petroleum pump prices is not necessary.
This was the stand of managing director/CEO of Stanel Group Stanley Uzochukwu at a press briefing with Channels Television at the premises of Stanel Filling station in Awka, the Anambra State capital.
Mr. Uzochukwu, who said this in solidarity with Nigerians who are made to suffer fuel scarcity believed to have been caused by hoarding, said at a time Nigeria was coming out of recession calling for pump price increase was not necessary because the business of selling fuel is still very lucrative at N145 per litre as his filling stations nationwide gets supplies from the NNPC and sells at N145 and still makes profit, even with any further increase in pump price.
The CEO said that only Stanel Filling Station at Ultra-Modern Luxury Mega Centre in Awka the south east selling petrol N145 per litre and 24 hours a day since the beginning of the crisis
It would be recalled that few days to the yuletide season major marketers called on the federal government asking for an increase or otherwise it would call its members nationwide on a general strike. 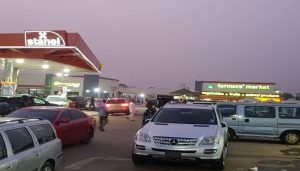 This they suspended after some negotiations with the government, but unfortunately triggered panic buying that now snowballed into scarcity, which the NNPC said was caused by hoarding.
The 1.5 million litre gas capacity plant strategically located between Nnamdi Azikiwe University (UNIZIK) and Anambra State Women Development Centre along Enugu – Onitsha expressway, which is the major access road to the south east region of the country. Stanel World Filling Station has been a life saver in the region.
The Stanel Ultra-Modern Luxury Mega Centre is a Facility with a Big Farmer’s Market with Standby Home Delivery Vehicles, Chicken Republic Fast Food Restaurant, French Bakery, Stanel Café, Pharmacy Store, Automated Car Maintenance Center, Car Wash, 1000 Sitters Capacity Chapel, Warehouse, Supermarket, Staff Quarters, Laundry, Spa, Event Center and whole lot of other products/services. All within the one stop Centre has helped fuel buyers as they queue to buy fuel, shop for food stuff, baked products, fruits as they travel for the Festive Season.
Mr. Stanley added that the Mega Center, for the interest of its teaming customers, is fully equipped with UBA ATM Gallery and Customers Service Center.