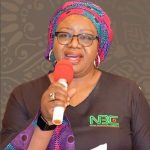 With heavy heart, the National Broadcasting Commission announces the passing away of the Head of Public Affairs of the Commission, Hajiya Maimuna Altine Jimada.

The Commission is saddened by her passing away especially at this time of the evolution of the Commission when her contributions are most required.

Mrs. Jimada was a thoroughbred professional, who was very carring, loving, jovial, charming and warm to all and sundry.

The Commission is even more saddened by the fact that her passage is coming just one day after the passage of another dutiful and committed officer, Miss Mabel Aladejebi. Until her passage, Mabel was a Confidential Secretary to the Commission. She was a friendly, loving and dedicated officer.
*Mrs. Maimuna Altinee Jimada*,
Born on August 14, 1966 into the Family of Alhaji Mohammed Koro.
She attended Ideal Nursery and Primary School from 1971-1976 , Queen Elizabeth College Ilorin from 1977-1982 and School of Basic Studies, Ahmadu Bello Univesity Zaria from 1982 to 1983. Afterwards, she also attended Kwara State College of Education from where she obtained NCE. English/ Islamic Studies. She then proceeded to University of Ilorin and graduated in 1989 with a B.Ed English and later a Masters degree in Public Administration from the same Institution.
Her broadcasting career started in the early 90s from Kwara Broadcasting Corporation Ilorin as a newscaster where she won the Governors award for Hard work.

She joined the National Broadcasting Commission in November, 1999, as a Senior Monitoring Officer. She won the Best Staff of the Year award for Abuja Zone in 2001.

Mrs. Jimada is what we may refer to as a ‘game changer’ as she brought into the department so many innovations and improvement to the way the department carried out its responsibilities.
She was a unifying force and a bridge-builder. She instilled in her subordinates the spirit of “can do” and teamwork.
Maimuna was a very sincere and disciplined person, always calm and unruffled even under immense pressure.
She was a member of the Nigerian Institute of Public Relations (NIPR) and Nigerian Institute of Management (NIM).​​ Above all, she was a lover of the poor and lowly regardless of faith and expended her resources to alleviate their plight.
Mrs J, as she was fondly called, is survived by her doting husband, Alhaji Umar Bologi Jimada (“Skip”) who was more like an extension of her, aged grand mother, parents, three children, a grandchild and siblings.
She will be greatly missed.