Hon. Peresine Watchman, the national coordinator, Atiku Abubakar Media Vanguard has pledged total loyalty and commitment to the PDP presidential Campaign Council and his members nationwide by ensuring that AAMV works with the mechanism and modus operandi of the Waziri Adamawa and the People’s Democratic Party to deliver all its  candidates in the 2019 general elections across the federation.

The AAMV Boss stated this at an emergency meeting with the Bayelsa State Chapter’s Executive Officers during the weekend. He used the opportunity to urged members to keep canvassing support for Dr. Atiku Abubakar and his running mate, Dr. Peter Obi until PDP wins the presidential elections in February 2019. Saying that Nigeria’s lost glory would be restored in the administration.

Reacting to the allege coalition by Atiku Support Groups, the AAMV Boss said, “Atiku Abubakar Media Vanguard was not formed in falsehood and as such would maintain the integrity of the group and work in line with God’s scriptural principles and believe in Him alone to give the group more grace, strength, wisdom and favour to support Alhaji Atiku Abubakar and Dr. Peter Obi joint PDP presidential ticket to victory in next year’s elections, which is believed to be the panacea to the problems bedeviling the country. 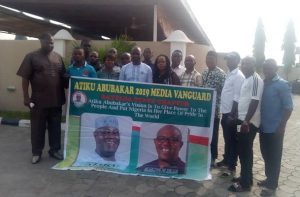 AAMV Boss applauded Bayelsa State Coordinator, Comrade Amientimi Botu and his team for the good work they have been doing to promote and canvas support for the Waziri Adamawa, saying that the personal resources and times they have used to support Atiku through AAMV platform would not be in vain. He stated further that AAMV Bayelsa State Chapter was amongst the States that are doing exceedingly great and the leadership of AAMV was always pleased with them.

Those at the impromptu meeting were the State Coordinator, Comrade Amientimi Botu; the Deputy Coordinator, Mr. David Tukuru; State Secretary, Mr. Denson A. Ojigbare, amongst others.