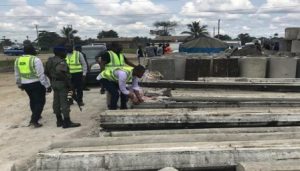 The Standards Organisation of Nigeria (SON) has advised users of concrete
electric poles within Rivers and Bayelsa States axis to be cautious in making
purchases of the product to avoid patronage of substandard and life
endangering poles.
SON also advised electricity distribution companies and individuals to
patronize only certi#ed concrete electric poles under the Mandatory
Conformity Assessment Programme (MANCAP).
The Director General, Osita Aboloma Esq. gave this advice during a standards
enforcement activity on 15 manufacturers of suspected substandard concrete
electric poles in the Oyigbo and Choba areas of Port-Harcourt, Rivers State
recently.
Represented by the SON Coordinator Rivers/Bayelsa, Engr Ololade Ayoola, the
SON Chief Executive alluded to the seal up of the premises of the companies
for producing suspected substandard concrete electric poles.
Engr. Ayoola disclosed that the exercise was in response to reports of several
fallen electric poles in the GRA and other areas of Port-Harcourt because of
heavy rainstorm, following which weeks of surveillance and investigation
activities done.
According to him, sensitization activities on the need to produce to
speci#cations in the Nigerian Industrial Standards for concrete electric poles
were done for all the players in the sector in Rivers State.
Further surveillance activities by SON however revealed that some
unscrupulous concrete electric poles makers in the state continued to make a
living from substandard and life-endangering products, he said.
“Some of the manufacturers were caught during production joining
short lengths of iron rods severally to achieve full length inside the
poles. Interactions with the operatives revealed total ignorance on
the speci#cations in the Nigeria Industrial Standard for concrete
electric poles”, he said.
STANDARDS ORGANISATION OF NIGERIA
The Standards enforcement exercise according to Engr. Ayoola, was to stem
the tide of continued production of substandard and life endangering concrete
electric poles in Rivers State, in the interest of the safety of Nigerian citizens,
in line with the mandate of SON, as enshrined in Act No. 14 of 2015.
He stated that dangers imminent from the continued production and
patronage of the substandard concrete electric poles include high risk of
electrocution as well as destruction to lives and properties.
The SON States Coordinator assured Rivers and Bayelsa people that SON
would #sh out all makers of substandard products in the states and bring them
to book in accordance with the laws of Nigeria.
Bola Fashina
SA (DG)/Head, Public Relations