Isa Dogonyaro, the Patron of Dogonyaro Farms has expressed confidence in the ability of his team to win the Guards Challenge title at the 2017 IWAF/Polo Carnival tournament.

The News Agency of Nigeria (NAN) reports that the carnival which began with a colourful durbar on Monday in the expansive premises of the Abuja Guards Polo Club is expected to climax on Sunday.

The opening match played on Friday saw Dogonyaro Farms and Capital Builders slugging it out in a pulsating encounter in the Guards Challenge for handicaps -3 to 0.

However, it was Capital Builders who edged Dogonyaro Farms in a nervy 7-6 thriller.

Dogonyaro told NAN that even though his team lost, they would still go ahead to lift the title on the final day.

“I can comfortably say we are the best team in our stream.

“We have beautiful mounts, everybody is enjoying himself and we are playing safe. 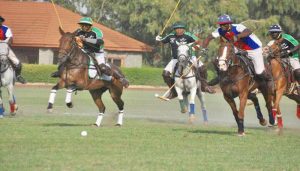 “The good thing about our game is that we play as a team and anybody can score as was evident in our game today (Friday).

“From today’s game you can see that even though we lost by a goal, we were the better side.

“It’s just the two of us battling it out for supremacy in the Guards Challenge and so as it stands it’s a one point difference but I can assure you that it will count for nothing in the finals on Sunday.

“I don’t want to say it’s anybody’s game because I am confident that the title is ours by the grace of God,” he said.

He however attributed the team’s loss to a few tactical errors but praised his team for putting up a good fight.

“Today’s game was quite interesting and my team had a good game.

“We took a huge lead in the second chukka but like it happens in the game of polo, it is never over until it is over.

“My players played with their hearts but that’s polo for you.

“We committed too many fouls and that counted against us,” he said. (NAN)