2017 FCT SWAN: NAN Finish as Runners Up in Football Event

The one-week competition was played at the Area 3 football pitch, with eight teams from Abuja-based media houses, and was part of activities of the 2017 FCT SWAN Week.

During the match, NTA dominated the first half to lead 2-0, with Haruna Umar scoring the second goal for his fourth of the tournament.

NAN overcame their lethargy in the second half to fight back, with Friday Okwori pushing upfront for Ben Puyate to score to make it his third goal of the tournament.

Their desperate efforts thereafter to retrieve the game, with the inclusion of Mohammed Awwal and Mohammed Mairiga, through a flurry of many offensive moves, yielded no goal.

Earlier in the third-place match, Hot FM beat Cool FM 3-2, scoring the winning goal in the sudden death penalty shootout after a 2-2 draw.

Speaking after the game, Yusuf Ahmed (Fresh), the sponsor of the competition, commended all the participants in the tournament, saying they had given him cause to do more in subsequent events.

Similarly, Kayode Adeniyi, the FCT SWAN Chairman, thanked God and all the participants for the success of the week.

“I thank God almighty for the success of this week and I thank the sponsor and all the supporters of the competition.

“In the past five years, we used to organise the competition among SWAN members alone, but this year we decided to reach out to all staff of media agencies in the territory and everyone is proud of the outcome.

“I won’t be here forever, but I hope the next executive committee will sustain this initiative,” he said. 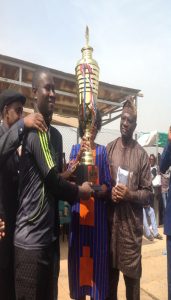 Also, Bayo Onanuga, the NAN Managing Director, commended the organisers’ initiative and urged participants to take a lesson from sports.

“In sports, there is always a winner and a loser. The winners should try to maintain victory, while the losers should work harder to win”.

Peter Agbeje, the captain of the NTA team, said “it was an exciting match as both sides really played very well but we carried the day.

“Thank God for our early lead of 2-0 in the first half saved us from the intensive attack of NAN in the second half which only got them a goal,” he said.

Similarly, Tijani Atojoko, the captain of NAN, said “it was an interesting match. We did our best, but as it is in every competition, one side must win, one side must lose.

“We thank the organisers of this competition as we shall do better to win the next edition of the competition.’’

Tokunbo Adesanya, the Team Manager of NAN, said was proud of the entire team of the agency during the FCT SWAN Week.

“Apart from the five-a-side that we won silver, we won gold in every other event which shows that we are the best team in this edition.

“We are proud of this achievement and we commend the organisers for creating the avenue for media agencies to interact and compete in a healthy competition like this.

“We shall do better in subsequent editions,” he said.

NAN reports that the 2017 FCT SWAN Week which started on Nov. 16 ends on Thursday with a Awards/Gala Night.(NAN)