The 2017 IWAF/Carnival tournament ended on Sunday in Abuja with a flourishing climax, with Almat CC, Iyatu Farms and Dogonyaro Farms polo teams finishing tops in their respective cup categories.

The News Agency of Nigeria (NAN) reports that the carnival which began with a colourful durbar on Monday at the Abuja Guards Polo Club ended with the grand finale on Sunday.

Almat CC made good their pre-tournament rating by defeating Aviva 7-4 to emerge winners of the high goal category.

The high-goal title which was decided before a full house saw the top-firing Almat CC beginning their pursuit of the event’s top prize on the front foot.

The quartet of Maurice Ekpenyong (0), Nura Suleiman (+1) and the highly rated Badamasi brothers, Idris (+3) and Abdulmalik (+3), combined well in a tense 11-goal thriller to win the cup. 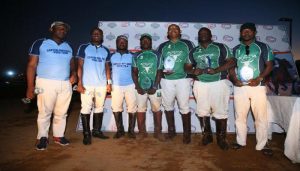 Idris and Abdulmalik were the key men for Almat CC as they grabbed a hat-trick each, while Suleiman scored once in an explosive six-chukker final which thrilled from start to finish.

The Nasiru Lukat-led Aviva also put on a good fight, especially in the first three chukkas but were unable to match the firepower of Almat CC in the long run as the game wore on.

Also, the battle for supremacy in the Guards Challenge went down to the wire with Dogonyaro Farms edging Capital Builders after a toss of the coin.

Both teams were tied on 10 points after a 4-3 win by Dogonyaro Farms at the end of hostilities on Sunday.

The game went into a three-minute extra time, but both sides were unable to score.

Capital Builders had won the first match 7-6 on Friday to make it 10-10 on aggregate.

Isa Dogonyaro, the patron of Dogonyaro Farms, after the match expressed delight at the win, adding that teamwork was key to the team’s victory.

“The key to our victory was team work, confidence and, like I said earlier, we were the better team and we proved that today.

“The game was quite tough. We were neck-to-neck up until the third chukka and then we scored the winning goal in the last chukka to force the game into extra time.

“After no goals in extra time, the umpire decided the game would be decided by a coin toss, even though we had wished it ended in a penalty shootout.

“But our opponents settled for a coin toss, which the umpire duly obliged and as God would have it, we won,” he said.(NAN)